For more than 30 years, Doug Varone and Dancers has devoted itself to the humanity and virtuosity of dance, reaching out to our audiences well beyond the proscenium arch. We believe this philosophy has allowed us to endure, earning the reputation as one of the most respected dance companies working today. Over time, we’ve created an expansive legacy encompassing dance, theatre, opera and film – establishing an impressive body of work.

The recipient of 11 Bessie Awards, the Company has toured to more than 125 cities in 45 states across the US and in Europe, Asia, Canada, and South America. Stages include The Kennedy Center, Lincoln Center, Brooklyn Academy of Music, New York City Center, San Francisco Performances, London’s Queen Elizabeth Hall, Toronto’s Harbourfront, Moscow’s Stanislavsky Theatre, Buenos Aires’ Teatro San Martin, the Venice Biennale, and the Tokyo, Bates, Jacob’s Pillow and American Dance Festivals. In opera and theatre, the Company regularly collaborates on the many Varone-directed or choreographed productions that have been produced around the world.

Doug Varone and Dancers continues to be among the most sought-after ambassadors and educators in the field. The company's multi-discipline residency programs take audiences deeper into the work, with hands-on approach that moves beyond the studio to speak directly to people of all ages and backgrounds, both dancers and non-dancers alike. Our annual intensive workshops at leading universities have attracted students and professionals from around the country, and through our innovative DEVICES choreographic mentorship program, we are training the next generation of artists an dance-makers. 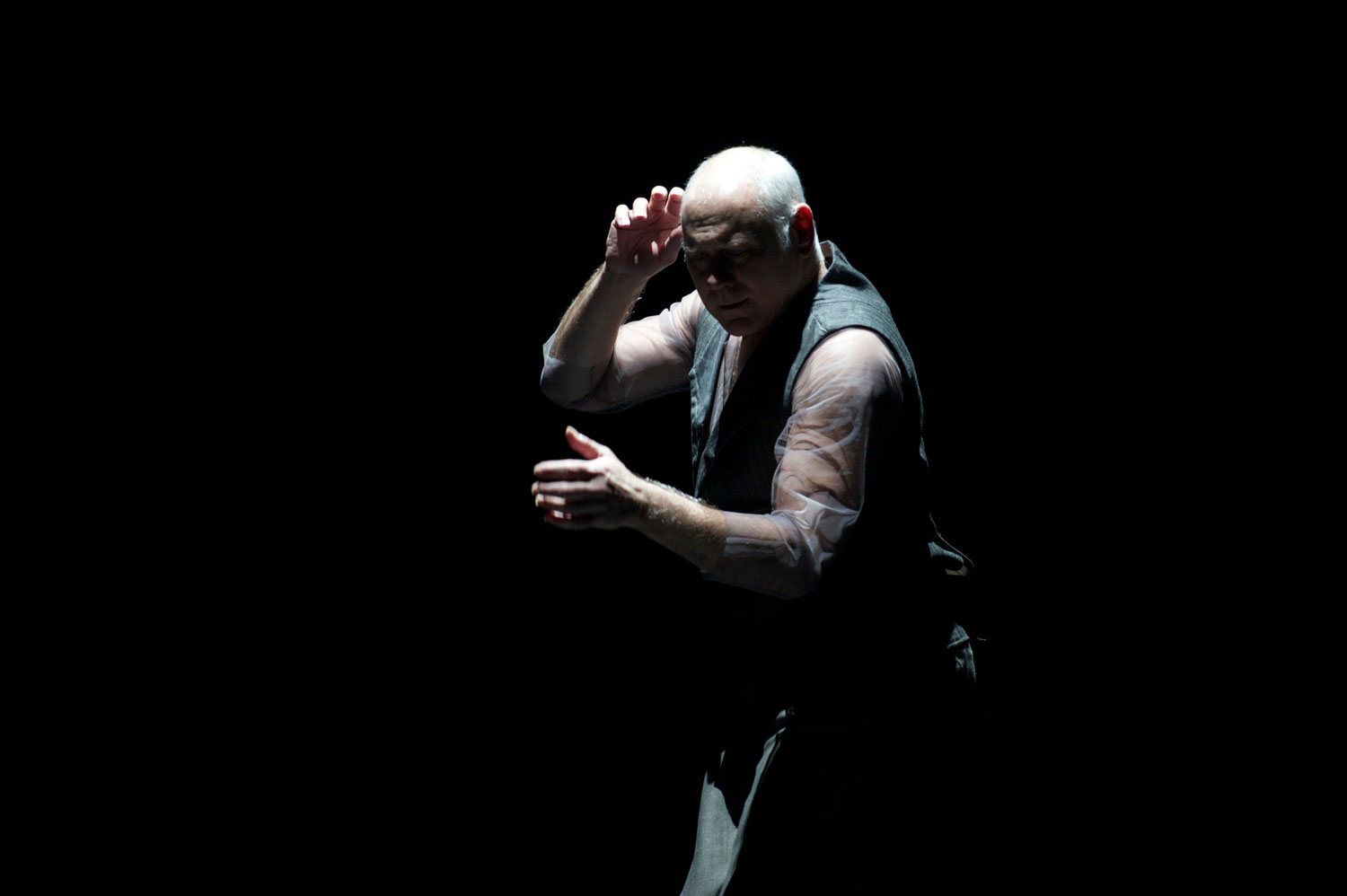 Award-winning choreographer and director, Doug Varone works in dance, theater, opera, film, and fashion. He is a passionate educator and articulate advocate for dance. By any measure, his work is extraordinary for its emotional range, kinetic breadth and the many arenas in which he works. His New York City-based Doug Varone and Dancers has been commissioned and presented to critical acclaim by leading international venues for close to three decades.

In opera, Doug Varone is in demand as both a director and choreographer.  Among his four productions at The Metropolitan Opera are Salome with its Dance of the Seven Veils, the world premiere of Tobias Picker’s An American Tragedy, Stravinsky’s Le Sacre du Printemps, designed by David Hockney, and Hector Berloiz’s Les Troyens. He has staged multiple premieres and new productions for Minnesota Opera, Opera Colorado, Washington Opera, New York City Opera, and Boston Lyric Opera, among others.  His numerous theater credits include choreography for Broadway, Off-Broadway and regional theaters across the country.  His choreography for the musical Murder Ballad at Manhattan Theater Club earned him a Lortel Award nomination.  Film credits include choreography for the Patrick Swayze film, One Last Dance.  In 2008, Varone’s The Bottomland, set in the Mammoth Caves of Kentucky, was the subject of the PBS Dance in America: Wolf Trap’s Face of America. Last season he directed and choreographed MASTERVOICES production of Dido and Aeneas at NY’s City Center, starring Tony Award winners Kelli O’Hara and Victoria Clark, alongside the Company. Most recently, he staged Julia Wolfe’s Pulitzer Prize winning oratorio, Anthracite Fields featuring the Bang on a Can All-Stars and the Westminster Choir.

Varone received his BFA from Purchase College where he was awarded the President’s Distinguished Alumni Award in 2007.  Numerous honors and awards include a John Simon Guggenheim Fellowship, an OBIE Award (Lincoln Center’s Orpheus and Euridice), the Jerome Robbins Fellowship at the Bogliasco Institute in Italy, and two individual Bessie Awards. In 2015, he was awarded both a Doris Duke Artist Award and the Lifetime Achievement Award from the American Dance Guild.  Varone teaches workshops and master classes around the world for dancers, musicians and actors.

Courtney Barth is originally from Las Vegas, NV and trained at Las Vegas Academy of Performing Arts and Inspire Dance Company. She is a performer, dancer and collaborator currently based in New York. Courtney earned a BFA in dance at SUNY Purchase where she performed works by Kyle Abraham, Martha Graham, Kevin Wynn, Loni Landon, and Greg Dolbashian. While at Purchase, she studied abroad at London Contemporary Dance School where she performed as an original cast member in Polaris by Crystal Pite at Sadlers Wells. In New York she has collaborated with Shannon Gillen, Kensaku Shinohara and currently works with Hannah Garner’s 2nd Best Dance Company. In 2016 Courtney apprenticed for Doug Varone and Dancers for their NYC season; in 2017 she joined the company as a dancer.
Click to learn more about me 

HOLLIS BARTLETT is a performer, teacher, creator, administrator, and advocate for the arts. His curiosity for movement and performance began at an early age, and eventually led him to NYU’s Tisch School of the Arts where he received a BFA in Dance. While at Tisch he also studied abroad at the Salzburg Experimental Academy of Dance in Austria. He has been a member of Doug Varone and Dancers since 2011 and also has had the pleasure of working with Brian Brooks, Adam Barruch, Steeledance, Sydney Skybetter, and the Metropolitan Opera. In addition to dancing for Doug Varone, he manages the company’s licensing and staging projects and has reset Varone’s repertory on colleges across the country. As an educator, Hollis has taught at the Bates Dance Festival, The Dance Complex (Boston), at universities including NYU, SUNY Purchase, UNC School of the Arts, The Hartt School, Connecticut College, and Hofstra University; and has ongoing open classes at Gibney Dance Center (NYC). From 2010-2015, Hollis served as a member of Dance/NYC’s Junior Committee; an incubator for the next generation of dance leadership working to bolster the dance community through research, discussion, and community action. As a creator, his collaborations with partner Nattie Trogdon have been presented at various venues including Dixon Place, Triskelion Arts, Gibney Dance Center, FIRST LOOK at Brooklyn Ballet and The Dance Complex (Boston).
Click to learn more about me 

BRADLEY BEAKES is a New York City based dance artist originally from Glendora, CA. A graduate of California State University, Fullerton, Bradley first moved to NYC in 2010 to attend the Ailey School. He later danced with Project 44, Naganuma Dance, and Visions Dance Theatre where he was named the 2010 Lester Horton Award Winner for "Outstanding Male Performance". In 2011, Bradley joined Ririe-Woodbury Dance Company where he performed until 2016. Bradley was honored to dance with the Limón Dance Company from 2016-2017 as well as guest perform with Keith Johnson/Dancers and NOW-ID. He has served on rotating faculty for the Limón School since 2016 and also teaches at Peridance and Gibney 280. His choreography has been presented in venues including INKUBATE Dance Festival, American College Dance Festival, the Great Salt Lake Fringe Festival, among others. Bradley joined Doug Varone and Dancers in the summer of 2017.
Click to learn more about me 

Jake Bone, originally from Dallas, Texas, earned a BFA in Dance with honors at the University of North Texas where he performed works by Bebe Miller, Kihyoung Choi, and Anna Sokolow. Since moving to New York City, he has been a company member for Bare Dance Company, Gibney Dance Company, and Awakening Movement. He has also had the pleasure of working with the Median Movement, the Metropolitan Opera, Bulareyaung Pagarlava, Kensaku Shinohara, and Steeledance. Jake joined Doug Varone and Dancers in 2015 and acts as the Company Manager and Tour Manager.
Click to learn more about me 

Joniece “JoJo” Boykins is an African American native of Inglewood, California. She graduated with honors, Cum Laude, receiving her BFA in dance from the Conservatory of Dance at SUNY Purchase College. During her time at Purchase, she performed the works of Doug Varone, Peter Chu, Kevin Wynn, Jonathan Reidel, Alexandra Beller, and Nejla Yatkin. Alongside her studies, she has attended professional programs such as Springboard Danse Montreal, Hubbard Street, Alvin Ailey, and Ron K. Brown/ Evidence’s summer workshop. Currently, she is the co-founder of the recently premiered dance festival, Upsurge Dance Festival. JoJo is also a company member with Lula Washington Dance Theater (Los Angeles). She has performed work by Donald McKayle, Rennie Harris, Christopher Huggins, Tommie Waheed, Lula Washington, and Tamica Washington-Miller. JoJo joined Doug Varone and Dancers in 2021.
Click to learn more about me 

Daeyana Moss was born and raised in New York City. She recently graduated from the Conservatory of Dance at SUNY Purchase in 2021. Prior to attending Purchase, she graduated from Fiorello H. LaGuardia High School of Music & Art and Performing Arts in Manhattan where she received the Father Fame award in 2017. While attending both Purchase and Laguardia she has been given the opportunity to perform works by Alvin Ailey, Janis Brenner, Joseph Hernandez, Annie Rigney, José Limón, Lajamartin, Anna Sokolow and Doug Varone. In addition to performing, she has a love for choreographing and teaching.
Click to learn more about me 

AYA WILSON is a dance artist originally from Normal, Illinois. She graduated from the University of Iowa with a BFA in Dance and a minor in Japanese. In New York, Aya has had the pleasure of working with choreographers including David Dorfman Dance, Sarah A.O. Rosner/the A.O. Movement Collective, Kendra Portier/ BAND|portier, Mariah Maloney, Nadia Tykulsker/Spark(edIt) Arts, Sarah Council Dance Projects, Tara Aisha Willis, and Kensaku Shinohara. She also teaches at Gibney Dance Center. In addition to dancing for Doug Varone, she works administratively as the company’s tour manager. Aya began working with Doug Varone and Dancers in 2015.
Click to learn more about me 

RYAN YAMAUCHI was born and raised in Honolulu, Hawaii and began his dance training at the Mid-Pacific Institute School of the Arts. He later moved to New York and received his BFA in Dance from SUNY Purchase. Ryan has had the pleasure of dancing with Loni Landon Dance Projects, ProjectLIMB, 2nd Best Dance Company, and Sidra Bell Dance New York (Apprentice). He has also performed as a guest dancer with Gibney Dance Company and Santa Barbara Dance Theater. As a choreographer, Ryan has created work for the Mid-Pacific Institute School of the Arts and The Juilliard School. Ryan began working with Doug Varone and Dancers in 2015.
Click to learn more about me 

Thank you! Your submission has been received!

Oops! Something went wrong while submitting the form